The Image Quality Extension (IQE) is a member of the Aphelion™ Imaging Software Suite of image processing and analysis tools. It provides a methodology for automatically assessing the quality of digital images, stored locally or remotely.

The quality of an image is very subjective since it highly depends on one’s perception of that image. It also depends on the ultimate goal for the use of the image in a specific application. Interpreting an image is different between two persons, who might have a different way to look at the image, a different way in mind to analyze the content of the image, and already thinking about the type of analysis and interpretation they want to perform on the image.

For example, an ophthalmologist looking at a retinal image may rate the image’s quality as very good for lesion detection, while a non-retinal specialist may consider the image quality as poor since he/she does not know how to identify the lesions.

IQE helps remove the subjectivity factor. Continuing with the retinal images example, the IQE process begins with ophthalmology experts manually grading a set of training images, assigning each to a specific class. In this example, there are five classes that characterize the visual quality of the image ranging from very poor to excellent.

Next, and staying with the retinal image example, IQE generates a classifier engine which is used to automatically grade new retinal images. IQE contains a rich set of image descriptors, also called measurements (e.g., area, perimeter, texture, contrast). Associated with each descriptor is an algorithm that computes the value of that descriptor for each input image. IQE uses the training set of images and the grades assigned to each by the domain experts to determine which of the descriptors are the most relevant to accurately grade new retinal images.

Please note that while the above explanation used the domain of retinal images, IQE is wholly general and can be used for any domain of images. For example, using IQ Annotator, which is included in IQE (Figure 1), the number of classes can be user defined along with their meanings, names, and numeric values.

The whole process of IQE can be decomposed into four steps: 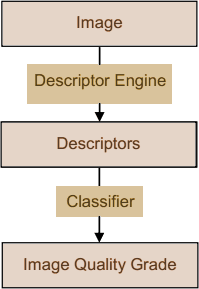 With the IQE Annotator interface, the expert can simply assign a specific grade to the image that is displayed on the screen. Shortcuts are provided to make the manual grading process easy.

In addition, the content of the training database can be displayed as thumbnail images. This enables a grader to perform an initial visual evaluation of the entire set of images to be graded. 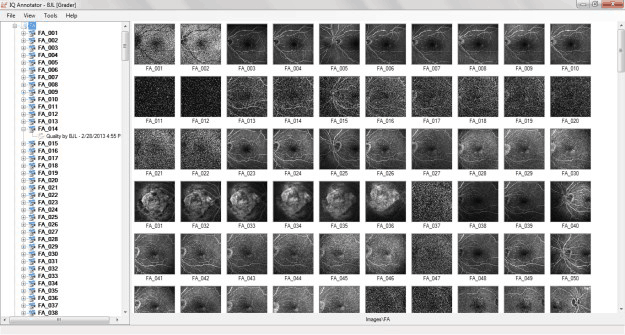 Once the classifier is generated, the user can evaluate one or a batch of images from the IQE interface, as shown below.

Note that IQE is implemented as a general tool for automating the process of grading images for the occurrence of domain specific features and events that are visually recognizable to domain experts. IQE helps imaging technicians to capture good images that are later automatically processed by tools such as the Aphelion Dev software. In addition, a warning can be generated to let the technician know the image is not a good quality image and it needs to be recaptured. It also helps reduce the size of image databases by discarding low quality images that are meaning less and will never be automatically analyzed. 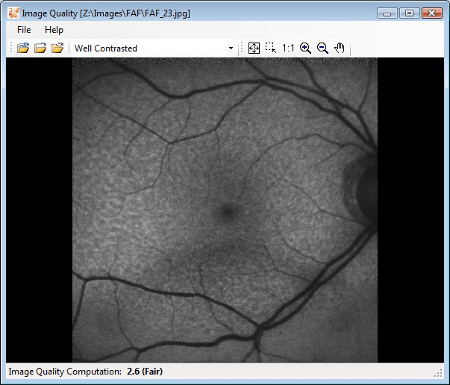 Call us to learn more about the Image Quality extension

Image Quality flyer available for download at the bottom of this page.