Tracking of an aircraft landing 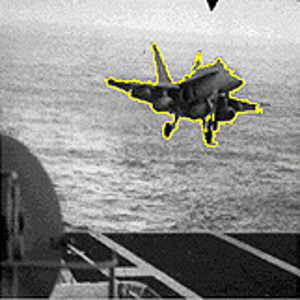 Tracking application is a small example application which was developed to show how you can use Aphelion™ ActiveX controls to solve a classical problem of tracking moving objects.

The Graphical User Interface is very basic. It includes a window to display successive images of the sequence, one window to display the extremity of the plane tail, and two buttons, one to run the process, and one to exit the application.

The algorithm includes a first threshold to get a marker of the moving object. Then a second threshold is performed on the difference to get the outline of the object. The tracked point is defined as the first point in the binary image, while scanning the image from top to bottom, and left to right.