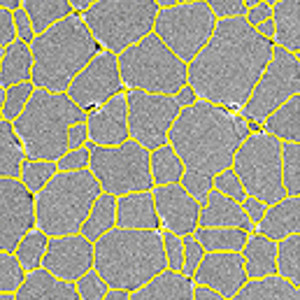 This software solves a common problem in materials science, namely the detection of grain boundaries. For example, ASTM standards refer to this detection.

The user interface appears as a combination of several windows with buttons calling some functions of image processing and mathematical morphology. The judicious combination of these features can automatically detect the grains and their boundaries in calling functions segmentation and analysis of size and shape. The user has very few parameters to be specified before the launch detection and the output image of the algorithm contains boundaries thinned and thick one pixel.

This software is absolutely expectations metallurgists who wish to automate the detection of grain material and quantify the number of phases and inclusions in steel. The software is based on a stand-alone program that takes an image in TIFF format as input and generates an image at the same output format. All measurements are exported to a file in Microsoft Excel format. The demo version is an executable Visual Basic.

The advantages of the detection software grain boundaries are: